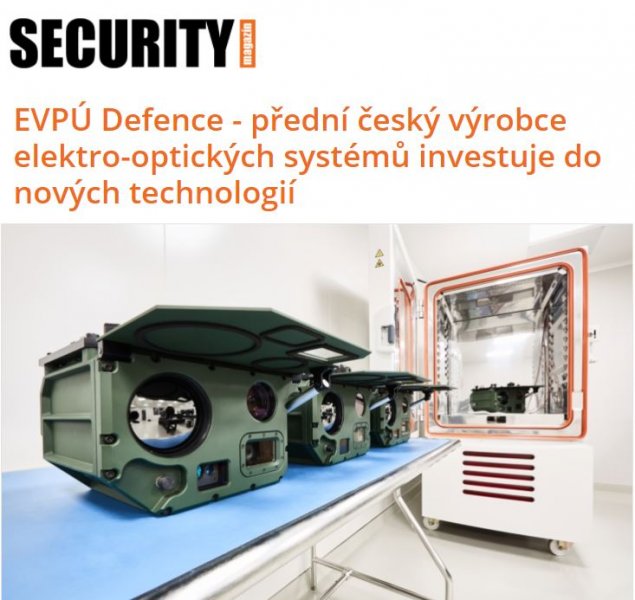 Security Magazine has recently published an article about EVPU Defence´s special production facilities. The original article is in Czech and we would like to share the English version with you here:

Regardless of how unfavourable the current pandemic and economic prospects in the Czech Republic might seem, a few companies have still chosen to expand their production facilities and work on improving their production processes. One of them is EVPU Defence, which has become known at home and abroad primarily as a specialist in the development and production of electro-optical systems for border surveillance, military and police forces. A few years ago, EVPU Defence built its own development, production and testing centre in Uherské Hradiště. This year, new equipment has been added to a special section of these premises, the so-called cleanrooms, and EVPU Defence thus confirmed its position among the absolute top producers in the industry.

Cleanrooms are actually laboratories that meet strict standards limiting the concentration of dust and microbial particles, pressure, temperature and humidity. Reducing dust and regulating other above-mentioned parameters then prevents dirt from entering the fine mechanical structure of cameras and systems. This is important because any little speck of dirt that would get inside the devices during production could later show up as a defect in the image.

EVPÚ Defence has two clean rooms, which are separated from each other by an air chamber and an air shower. The first room meets the ISO 8 purity class and qualified specialists perform all measurements, mechanical assembly and service of electro-optical systems there. The staff use special equipment, which includes collimators for measuring optical properties and rectification of optical systems, a climate chamber for simulation of temperature tests and an active black body for calibration of cooled and uncooled thermal imaging cameras. The second room (ISO 6 purity class) is where a full analysis of the functionality of the cooled detectors, their maintenance and replacement of the cooling medium takes place.

What are the advantages of the new equipment?

The cleanroom equipment allows the EVPU Defence experts to provide comprehensive services including parameter measurement, geometric properties and service of mechanical components of daytime and cooled or uncooled thermal imaging cameras. In addition, they can also service laser rangefinders and complete electro-optical systems.

Why are cleanrooms so important?

EVPÚ Defence is a company with a 20-year tradition, which prides itself on the quality of its products. The electro-optical systems produced in Uherské Hradiště contain highly sensitive daytime and thermal imaging cameras whose output image must be perfect, because people’s lives and safety depend on it.

In order for the system to be 100% reliable, the producer must completely satisfy a number of demanding production standards. "Besides, separate production in cleanrooms has a number of advantages, such as faster and better product assembly and the possibility to produce an electro-optical system, revive it and measure its parameters in one laboratory," said Martin Vala, a research and development specialist responsible for the cleanroom operations.

Readers are more than welcome to come and see the range of products made in the EVPU Defence cleanrooms at the company’s IDET exhibition booth in October this year, provided that the pandemic situation allows.